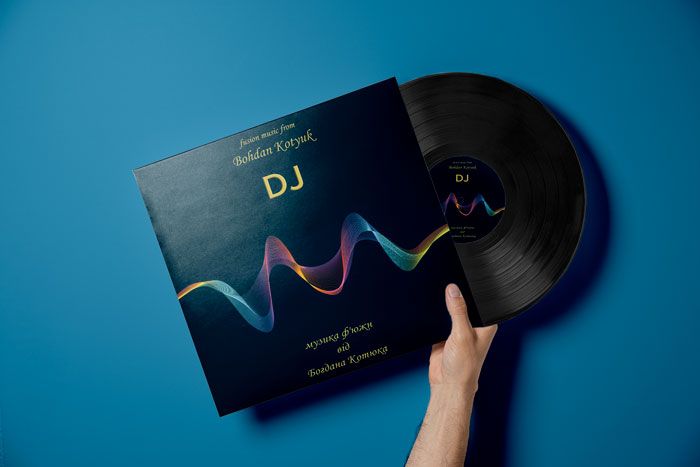 Ukrainian composer Bohdan Mykolayovych Kotyuk presented a new fusion collection. The album consists of 5 tracks. Here is what the author himself says about him.

My generation learned about music through the radio and records on large vinyl records, also called Long Play or LP. Among young people, owners of large collections of LP discs had a special authority. Dance floors turned into discotheques, where the role of musical bartender-sommelier was given to the "DJ", or – DISC JOCKEY. Operating his own collection of LP's, he set the pace, rhythm and mood of the disco audience. The DJ imposed his musical tastes, addressed the audience with the help of a microphone, and started the dance floor with his acting and sometimes juggling art of manipulating discs.

The title track of this CD, or fusion collection of my works, is called "DJ". It sets the tone for listening to the entire collection. The change in mood, the nature of the sound of each of the fusion compositions is connected with specific life experiences, my own tastes in the extremely rich and diverse genre style of music of the 20th century. This is "Nostalgia" for the novelty of musical impressions; fairy-tale memories (“Gnome”) from communication with children's souls; stunning impressions from traveling through Europe and a symphonized tribute to the music of the idols of all the youth of the 60s and 70s of the 20th century. "All you need is music" is not just a DJ cover version of The Beatles songs, but a rhapsody that affirms not only our desire for love, but also glorifies the art of music.

Konzertstück (Concert piece) is a one-part large-scale work of a virtuoso nature in a complex developmental form, intended for concert performance by a soloist, most often without the participation of an orchestra. Konzertstück “DJ” for solo piano demonstrates the energetic tension of funky polyrhythms juxtaposed with the lyrics of an improvisational blues presentation. Sharp thematic juxtapositions, based on a frame-by-frame dramaturgy borrowed from cinematography, create the effect of a kind of juggling of musical material.

The idea of ​​creating a DJ for piano arose in the 70s, but in the final version as Konzertstück “DJ” for Piano-Solo, it was repeatedly performed in various concerts and in 2017 it was recorded on a Steinway & Sons grand piano in the Concert Hall named after Art. Ludkevich Lviv National Philharmonic named after M. Skoryk, an outstanding Ukrainian pianist, a professor from Dnipro, who is currently working in Israel, Nataliya Zolotaryova.

The musical ballad as a genre arose in the era of romanticism. The lyrics and narration then resonated with the epic. In the second half of the 20th century the lyrical rock ballad genre arises. The intrusive repetition of the thematic grain, the love of melodic lyricism and unexpected harmonies are evidence of the influence of rock genres R&B and Soul-music on Ballad for String Octet “Nostalgia”.

The ballad "Nostalgia" in the first version was written in 2016 for chamber orchestra. In the second edition, offered in the "DJ" collection, this is a more detailed and impulsively sharpened version of string chamber music. It was composed for the special order of the string ensemble "Quattro corde" of the Ivano-Frankivsk Philharmonic (octet or double quartet) under the artistic direction of Angela Prykhodko.

Searching for a friend to take care of (think of Antoine de Saint-Exupéry's "Little Prince"). And also - communication problems with always busy adults. These thoughts very often become a difficult task for children who are just getting to know the world of their parents - it is complex and quite strange. Therefore, the closest friends become the dog Sirko, the fabulous "Carlson who lives upstairs" or the Dwarf. These were my conclusions from communicating with my own children and young schoolchildren while working in a comprehensive school. Among the number of songs I wrote for children at that time, "Dwarf" stands out for its somewhat complicated jazz metro-rhythm, harmony in the style of jazzman, poet and "cosmic philosopher" Sun Ra and virtuoso texturally inventive piano accompaniment.

The text for "Dwarf" is taken from the poems of Tamara Kolomiets, and the song is performed by z.a. Ukr. Iryna Makovetska (soprano) accompanied by pianist Rostyslav Kotyuk.

The concert piece "Monaco" is a combination of postmodern constellations with a romantic interpretation of the concerto form for solo piano. The stylistics of this piece can be described as virtual clip-making with sound complexes. "Monaco" is a dream image that gives everyone the opportunity to interpret the joys of life and the happiness of LIVING in their own way!

Monaco in Provence is a place on earth where you want to dream and where there is a high probability that dreams will come true. Monaco is the Rock; this is the Princely Palace; this is the luxury of the Age of Beauty; it is Casino and Opéra Garnier; this is the Formula 1 race track. Monaco is the standard of the great love of Prince Rainier III and his wife Grace, but at the same time, it is also the steep turn of the death of the charming Grace. Monaco is the success in the world charts of their daughter, princess and pop star Stephanie.

In the drama "Richard II", the genius Shakespeare wrote: "Monaco is a noble stone that surrounds the silver sea..." Konzertstück for Piano-Solo "Monaco" is in the concert repertoire of pianist Natalia Zolotaryova. In 2017, it was recorded by her on a Steinway & Sons grand piano in the Concert Hall named after St. Ludkevich Lviv National Philharmonic named after M. Skoryk.

Since the time of Homer, who was a rhapsode (that is, a chanter of his own epic poems), rhapsody has established itself in music as an independent genre. Rhapsodies by Liszt, Brahms, Ravel, Dvořak and Rachmaninov are instrumental stories about popular music. The thematic basis of this large-scale instrumental narrative is the hits of folk music, or just one super-hit (the 24th caprice of Niccolò Paganini). "All you need is music" is a tribute to the phenomenal phenomenon in music of the 20th century, which is known as "The Beatles". The title of this Rhapsody echoes the anthem of the hippie movement "All You Need is Love" created by John Lennon.

Beatles-Rhapsody is built using three themes. These are George Harrison's "Here Comes the Sun" and Paul McCartney's "Yesterday" & "Lady Madonna". In contrast to the variational development in the rhapsodies of romantic composers, the compositional basis of my Beatles-Rhapsody is based on the principle of symphonism and contrasting drama. "All you need is music" in the initial edition was written on the order of the Academic Chamber Orchestra "Virtuosos of Lviv".

The current edition of the piece in the guise of a symphonized Beatles-Rhapsody was commissioned by virtuoso violinist Angela Prykhodko for the string ensemble "Quattro corde" of the Ivano-Frankivsk Philharmonic. A piano part was added to the string octet or double quartet for the scale of the sound, which was performed by the Lviv pianist Oksana Stechyshyn at the Festival Concerts.