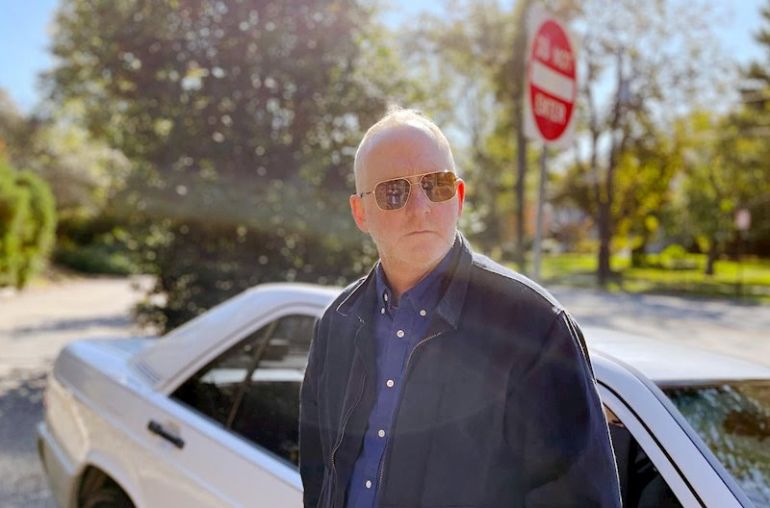 Today I present 'Slumber' by New Jersey artist ROB MUNK, which can be found on his debut 'Phased Out' LP.  A sign of the times, this song is a  plea to return to simpler days. Munk says, "Slumber chronicles the challenge of trying to find rest in a time of unrest, peace when you are disturbed. before the anxieties that tend to bloom with insomnia were fully justified because things are truly scary... There’s been a lot of stuff happening with AI these days, but it seemed apt to apply it to the dreamworld where this song lives. We used it as a tool to help bridge that nebulous gap between 1 and 5 in the morning, where the surreal and the hyper-real are almost interchangeable."

Stereo Embers Magazine writes, "Breaking a 20-year hiatus from releasing music, Rob Munk has roared right back... Munk—whose old bands Thudpucker and Tinsel found him opening for Guided By Voices, Pavement and the Afghan Whigs—hasn’t lost a step," calling this single "a crunchy blast of indie rock bliss that’s redolent with laconic charm and unexpected longing. Bringing to mind everyone from Built To Spill to Australia’s late great Soap Star Joe, “Slumber” is as dynamic and hook-laden as it gets."

"Sassy power-pop... the same blend of jaunt and joyfulness and slightly downbeat and world-weariness running through their music as, say, The Lemonheads or The Dandy Warhols. Not to mention no small amount of early R.E.M. wonky majesty" ~ Big Takeover Magazine

"Enjoyable, danceable, moshable – timeless in the same way as Pixies and Throwing Muses will never seem old. But Munk’s music itself is perhaps closer to Sebadoh, Sparklehorse, The Shins, Fastball, Weezer or Presidents of the USA" ~ Amplify Music Magazine


American indie rocker Rob Munk presents 'Slumber', the latest offering from his new 'Phased Out' LP, a sign of the times, where so many people are challenged to rest and even sleep through the night.

"Slumber chronicles the challenge of trying to find rest in a time of unrest, peace when you are disturbed. It’s a plea to go back to a simpler time, before the anxieties that tend to bloom with insomnia were fully justified because things are truly scary. Basically, just let me sleep," says Rob Munk.
"There’s been a lot of stuff happening with AI these days, but it seemed apt to apply it to the dreamworld where this song lives. We used it as a tool to help bridge that nebulous gap between 1 and 5 in the morning, where the surreal and the hyper-real are almost interchangeable. The imagery added both depth and comedy to a pretty relatable scenario."

'Phased Out' comes 20 years after initially leaving the music scene. Alas, music takes on its own life, pushing Rob back into its realm with better and more personal songs than ever before. During the pandemic, Munk recorded this album with actor-writer-artist Daniel London (Old Joy, Minority Report, Manhattan) and Tinsel drummer Joe Ventura.

Released via Montclair, NJ-based Magic Door Label, a grassroots imprint founded by Guided by Voices' Kevin March, producer Ray Ketchem and artist-vocalist Renée LoBue, this ambitious 2-track collection is, according to Munk, "a little poppy, a little sloppy and entirely honest".
"Phased Out was such a joy to make. No oversight but my own standards, nothing at stake but my integrity. Years after wanting a career in music, I made music to supplement my career. I worked with masterful collaborators who understood my vision and worked hard to make it happen. I feel lucky for the opportunity, and proud to make a record as good as I could make," says Rob Munk.
Mixed in Oakland by Chuck Johnson at Cirrus Oxide, this album was produced, recorded, mastered and partially mixed at Magic Door Recording by Ray Ketchem, whose production credits include Guided By Voices, Gramercy Arms, Luna and Elk City.

Earlier, Munk released the singles 'Youth', 'Amazon' and earlier singles 'Heavy Shoes (to kill the blues)' and 'Ghosts of San Francisco'. With elements of 1990’s and 2000's indie rock and traces of 1970’s AM pop, this is music that respects people's emotional intelligence.

For Rob Munk, music was never the plan. From the age of three, he and his brothers did acting gigs to help support life with a single Mom. After several years in commercials (including Jello pudding with Bill Cosby), Rob was cast as young Woody Allen in 'Stardust Memories', his brother having played this role in the Oscar-winning 'Annie Hall'. He left acting at 14, forming a band and quickly discovering that music felt more natural and was far more fun than acting. He was hooked.
Rob’s earlier band Thudpucker was a staple on the 1990s Boston rock, opening for Pavement, Hole, Afghan Whigs and Juliana Hatfield. He later formed the indie rock band Tinsel in Chapel Hill, NC, who opened for Polvo, Guided By Voices, Pipe and Come, while also playing in cover bands with members of Firehose and Superchunk. Both of those bands eventually imploded of natural rock and roll causes.

After stints in a few more NYC bands, Munk returned to acting, including scenes with Tina Fey, Tony Hale, John Goodman and Paul Giammatti. After moving to LA for a pilot season but getting no traction there, Rob launched the now-defunct blog 'LoserActor', creatively chronicling his daily humiliation. Noticed by the famed ad agency Wieden + Kennedy, Rob returned to NYC as a copywriter and creative director, writing huge campaigns for ESPN, Delta Airlines and AT&T.

The 'Phased Out' LP is out now, available everywhere digitally, including Apple Music, Spotify and Bandcamp, where it can be ordered directly from the artist.

OUT NOW: A CLOUD OF RAVENS Nature of Artifice and CHRIS CONNELLY on the tragic & misunderstood music icons NICO

I couldn't hold back the tears: TOM SODA has released a music video featuring the victims of shelling in the Kyiv region