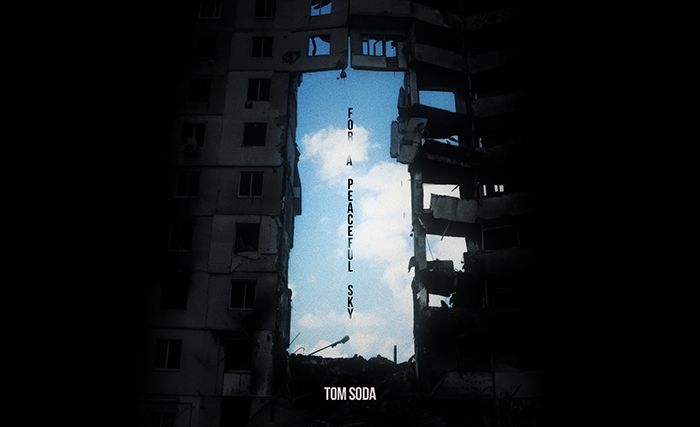 Singer TOM SODA has released the track "For a Peaceful Sky", with a mission to show the world what it means for every Ukrainian to lose a "peaceful sky" above one's head.

Since spring, the artist has been working closely with the "For a Peaceful Sky" foundation, which has helped rebuild more than 100 houses in the Kyiv region. TOM decided to put all the experience gained from this cooperation into a manifesto song reflecting the Ukrainian reality.

"All the proceeds from listening to this song will be used to reconstruct the housing destroyed due to the Russian aggression. Let the song about what we've lost help us get it back. I decided to present the music video on the Day of Dignity and Freedom of Ukraine because when, if not on this day, to sing about the price of freedom and dignity",

The song was beautifully produced by a talented Kharkiv resident - Petro Berestenko, and the lyrics are by the Ukrainian author and performer, ANDRUX, who now lives in the USA.

"I wrote him a long letter in which I asked him to find the words to explain to people abroad the real meaning behind a "peaceful sky" and what it means to lose it. The next morning, I received an acoustic recording, and I could not stop crying for several hours after listening to it",

In the music video, the singer used real footage of the families affected by the shelling in the Kyiv region to show the world that what is happening to us is not a movie or a news story - this is our life.

OUT NOW: A CLOUD OF RAVENS Nature of Artifice and CHRIS CONNELLY on the tragic & misunderstood music icons NICO